I am constantly on the hunt for new books to share with Little Man. It drives my hubby insane, but with two huge book lovers in the house, he has slowly gotten used to finding books tucked everywhere for easy access.

Recently, we had the chance to read two stories from Janet Halfmann. The first, Fur and Feathers follows a dream of young Sophia. In her dream, she sees a whirlwind of animals, all who have lots their fur, feathers, and scales. After trying to replace their skin coverings with her own clothes, she realizes the animals aren't happy. But with a little imagination and creativity, Sophia is able to create coats for all the critters. 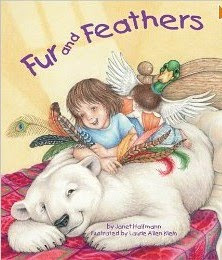 The story is a sweet tale of helping others and thinking outside the box. It's also accompanied by wonderful illustrations by Laurie Allen Klein. Little Man adored the story and enjoyed coming up with his own ideas on ways he would cover the animals with things around our house.

The second story, Good Night, Little Sea Otter, tells the tale of a little otter avoiding sleep. I think most parents out there could relate to a little one who "has" to say good night to everything imaginable before falling asleep. In the story, Little Sea Otter has to say good night to all the ocean creatures before he closes his eyes and mama tucks him into their kelp bed. 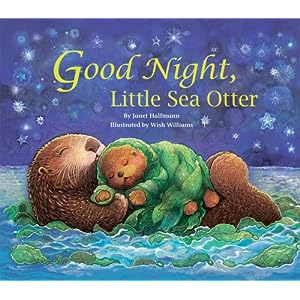 The adorable illustrations by Wish Williams bring Janet Halfmann's story to life. They are a perfect companion to the story, which is tender and loving. Little Man and I both enjoyed reading the story before bed, and he was sure he said good night to every single one of his stuffed animals afterward.

Buy It: Fur and Feathers and Good Night, Little Otter can both be purchased at Amazon

We were provided copies of the books for review. All opinions are our own.
Posted by Staci A at 2:00 PM

Thank you so much for the great reviews of my two new books. I love how Fur and Feathers inspired Little Man to come up with his own ideas on how to cover the animals, and how Good Night, Little Sea Otter prompted him to say good night to every single one of his stuffed animals. Happy Reading to All!