At the beginning of the month, Fisher-Price, along with celebrity zoologist and children's show host, Jarod Miller, announced the launch of the Little People Animal Sounds Contest. The contest invites parents to submit a video of their child making their best animal imitations. Everything from squawks to roars to growls are welcome! 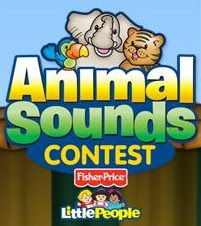 The winner will receive $10,000 and a trip to Fisher-Price headquarters in East Aurora, New York for a special photo shoot and a chance to be featured on a Little People product or website.

In addition, ten first prize winners will receive a Zoo Talkers toy prize pack and all successful submissions will be entered for a chance to win one of 100 Zoo Talkers Safari Trucks.

To enter, grab your camera, encourage your little one (ages 1 to 5) to use their imagination and get a little wild and loud. Then visit the Animal Sounds Contest page to submit your video, or submit it through the iPhone or Android App. Videos must be under 20 seconds and feature your little one making one of the following animal's sounds: lion, tiger, elephant, bear, penguin, rhinoceros, leopard, whale, polar bear, hippopotamus, monkey, seal, gorilla, alligator, zebra, giraffe, ostrich, dolphin, snake, or bird. After submitting your little animal lover, be sure to share the site link for your friends and family to go vote for your video.

The contest has already started and will run until November 30, 2011.

The Animal Sounds Zoo contains a zoo play set, a zookeeper, polar bear, lion, and gorilla. When the animal figures are placed on the paw pad in the zoo hut, your child can hear the animal's name and sound. The play set has lots of features to keep little ones engaged, including a water slide to push animals down, a treetop swing, and a hippo that opens his mouth and snorts.

The Animal Sounds Zoo was a huge hit with my 3 year old nephew (as well as my little guy, who though older than the recommended age, had no problem playing alongside his cousin.) They loved that the play set talked to them and offered several different places to play. With a polar region, treetop, lake, cave, ticket booth, and hut, they both had their own space to pretend in. Perfect for those moments when they don't feel like sharing.

Buy It:
The Animal Sounds Zoo is available for $40 and additional animal figures can be purchased for $3 each.

Product was provided for review. All opinions are our own.