I'm so used to reading non-fiction books with my 7-year-old, that when I first heard the title The Deep Black Pond, I automatically assumed it was a book about fish and other water critters. But after reading more about the book, I learned it was a very imaginative tale by Morgan Kostival. 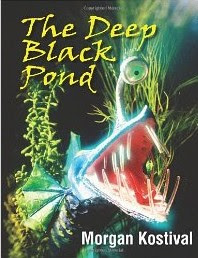 The Deep Black Pond is the story of fantastic critters living in a pond in the middle of a tropical island. You won't find your typical animals on this island. However, you may find a fish with a glowing eye, a queen with a mask of solid gold, or a warrior with an entire village of Peewees on his shoulders.

It's one of these Peewees that becomes the star of the story. When little Mimi falls off the edge of the city, she changes everything in the pond. She brings the characters together and gets them to cooperate after years of distrust.

Kostival not only authored the book, he also created and photographed the images throughout the story.

A copy of the book was provided for review. All opinions are my own.
Posted by Staci A at 3:37 PM 2 comments:

Our party kit included a Skylanders Spyro's Adventure Starter Pack, game posters, figurines, and an educational DVD. The starter pack is made up of the Wii game, 3 figures, 3 trading cards, and the magical Power Portal that allows the figures to come to life within the game.

The game is perfect for kids 6-12, but apparently just as popular with grownups. Our party included kids of all ages, and every single one had a blast playing. The kids took turns using their figures and when they weren't playing on the Wii, they were playing a game of imaginary Skylanders on the other side of the living room. 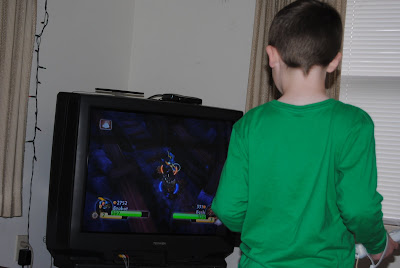 To get in the party spirit, my 7 year old helped me make snacks for all his friends. We had Camo Krispies (aka Rice Krispie Treats), Eruptor's Fire Balls (cheese balls), and Chop Chop Cookies (chocolate chunk cookies). To drink, we offered Cynder Cider (apple cider) and Prism Break Punch (Hi-C). 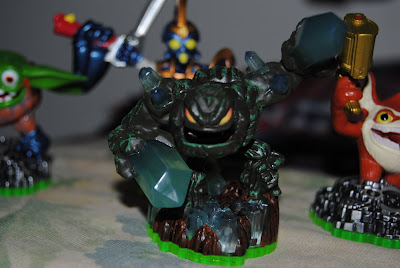 I heard yesterday from another mom that Skylanders Spyro's Adventure was her daughter's new favorite game. And after our House Party was officially over on Saturday, I caught my hubby and another dad playing the game on their own.

Skylanders Spyro's Adventure has been called one of the hot toys for Christmas this year, and I can see why. With so many fun and intriguing characters, the kids never get bored, and there's so many different elements to it: the figures, the video game, which offers adventure or battle mode, and an online game. My son has added many Skylanders' figures to his Christmas list, and I have a good feeling many of his friends will be asking for the game or figures as well.

We received items to facilitate our review and party. All opinions are our own.
Posted by Staci A at 6:00 PM No comments:

I heard today that there's only 60-some days left to start finish Christmas shopping. If you're like me, and still have quite a few people on your list, you'll love the deal Glow Crazy is offering this weekend.

On October 22nd or 23rd, buy a Glow Crazy Distance Doodler at any WalMart, Toys R Us or local retailer, and they'll send you a FREE Glow Glove! That makes two gifts for the price of one. But remember, the deal is only valid Saturday and Sunday. 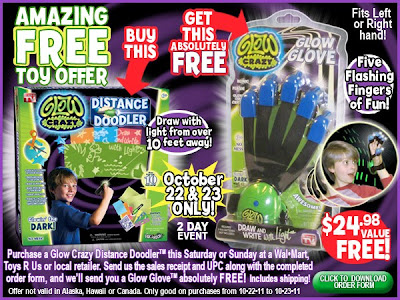 Information was provided for this post, but all opinions are my own.
Posted by Staci A at 10:46 AM No comments: