In case you haven't heard, July is National Ice Cream Month, which means you have the perfect excuse to indulge in a sweet treat or two. To help you celebrate, Breyers, Klondike, Popsicle, and Reese's, have several new treats in your grocer's freezer section.

Breyers Blasts!
Breyers has several new Blasts! flavors out. Each one features some of the most popular cookies or candy pieces. With so much flavor packed into every scoop, it might be hard to pick a favorite.

Klondike Bars
Klondike bars are always a hit in our house. Not only are they delicious, but with their chocolate coating, they are one of the least messy treats that I can offer my 6-year-old on a hot day.

The new Klondike flavors include:

Reese's
Since Little Man is allergic to nuts, we typically keep our house nut-free. But with this pregnancy, I have craved chocolate and peanut butter together more often than I'd like to admit. So, I keep a stash of Reese's Peanut Butter Cups hidden for after he goes to bed. Now Reese's offers a Peanut Butter Ice Cream Cup. I actually found these in my local grocery store several weeks ago and had to try them. They definitely satisfy my cravings with their slightly salty peanut butter and creamy chocolate coating.


Popsicle
By far one of my son's favorite treats are frozen pops. I'm always amazed at how quickly he can devour them! Popsicle Jolly Rancher Awesome Twosome ice pops are no exception. Little Man gave them two thumbs up and loved that there was more than one flavor inside his pop.

The new Popsicle flavors include:
With so many new frozen treats, our only problem is finding time to try them all!

Buy It:
Find Breyers, Klondike, Popsicle, and Reese's in your grocer's freezer section

Samples were provided for review. All opinions are our own.
Posted by Staci A at 7:52 PM 1 comment:

With temperatures soaring this past week, Little Man and I spent several afternoons lost in books. It was a perfect way to encourage him to read while surviving the 90+ degree weather.

Otto lives under the bed of 9-year-old Zeke, who decides to experiment with Otto's magical powers alongside his 7-year-old sister Hannah. Otto has the ability to "swap-o," he can exchange any object for something completely unexpected. A soccer ball becomes a pig, a robot becomes a little, angry green man, and a jewelry box becomes a jeweled bird.

The story of Zeke, Hannah, and Otto is a silly and engaging read for kids 7-10. It includes comics book sequences throughout the book, which were one of my son's favorite parts. And it keeps kids wondering what will come next. Little Man could not stop reading. He just had to know what would happen the next time Otto shouted "hoobah" to start a swap-o.

Buy It:
Beast Friends Forever: The Super Swap-O Surprise will be available in August 2011 for $4.99.

A copy of the book was provided for our review. All opinions are our own.
Posted by Staci A at 10:31 PM No comments:

***Closed: Congrats to DARLA, Melissa B, and Misusedinnocence***
I can't say enough about Dav Pilkey's books. My son is a book lover, but even he has days where he doesn't feel like reading. However, even on those days, he's more than happy to pick up one of the Captain Underpants books, or a different title from Pilkey. Pilkey's writing style has a huge appeal for younger boys. What 6 year old boy doesn't find mild bathroom humor giggle-worthy?!

Super Diaper Baby 2: The Invasion of the Potty Snatchers (for ages 7+) definitely has it's share of bathroom humor. Though in this part of Diaper Baby's saga, George and Harold (the kids creating the story) avoid talking about going number two and focus on pee-related jokes instead.

In the story, Dr. Dilbert Dinkle is an ordinary, everyday evil genius/inventor/bank robber. But after being transformed into a puddle of pee, he decides to destroy every toilet in town. Dr. Dinkle and his evil, smart-mouthed cat, Petey, try their hardest to banish the town of toilets and teach the townspeople a lesson. But Super Diaper Baby and Diaper Dog have something to say about their devious plan.

My son couldn't help but laugh when we read about Rip Van Tinkle or "How the Pee Stoled Potties," a chapter in the book that is written in similar format to How the Grinch Stole Christmas. He loved the dialogue and drawings in Pilkey's latest graphic novel.

Buy It:
Super Diaper Baby 2: Invasion of the Potty Snatchers is available for $6.99

Check It Out:
View the trailer for the book

Win It:
3 lucky readers will win a copy of Super Diaper Baby 2: Invasion of the Potty Snatchers

Mandatory entry: Tell me in the comments if your kids have read any of Dav Pilkey's books yet. I'd love to hear which one has been their favorite!

A copy of the book was provided for review. However all opinions are our own.
Posted by Staci A at 8:00 AM 23 comments:

We love summertime. But some days, it's just too hot to even think about going outside. So I have to brainstorm ways to keep my 6 year old busy, without letting him watch SpongeBob all. day. long.

Little Man loves to draw, so I knew the Distance Doodler would be a hit with him. And I was definitely right.

The Glow Crazy Distance Doodler allows kids to write and draw on glow clings, using a "magic" lightwand. The glow clings are easy to apply to your wall, and are supposed to come off easily. (I can't attest to the removal since Little Man has used it every day since I put it up.) Once the cling is up, all you need is a dark room and a little creativity.

There are two modes on the lightwand. One allows the doodler to draw using a thin line of light and the other uses a thick area of light. The thicker beam can be used to create silhouettes of other people, toys, or just about anything else you can imagine. We had fun seeing what toys and random household objects looked like as silhouettes. The images disappear rather quickly, but my son loved this since it meant he could constantly be drawing something new.

The Distance Doodler has provided my son hours of entertainment. We've practiced writing, played games, and have had contests to see who could draw different objects. (Little Man usually won, as I'm the least artistic person ever.)

We are definitely glad to have a new, fun activity to do on days when it's too warm or raining outside. Plus, I love that it encourages creativity and writing skills!

It seems that summer is flying by already, and I feel like we've done nothing! But when I really think about it, I realize that Little Man has had the chance to do quite a few things this summer already. And we still have two months to go. (Though I can't believe it's only two more months and that baby #2 will be arriving before summer comes to an end.)

A few weeks ago, we took a little 6-hour road trip. Surprisingly, the car ride went amazingly well. Little Man only asked if we were "there yet" 42 times, hubby only got us lost 3 times, and we only narrowly missed getting hit by another car twice. The number of times my seat was kicked was too high to count though, and the fact that it was followed by a smaller kick inside my belly almost every time made my hubby giggle. I wasn't nearly as amused.

Once we were there we spent a week doing fun things. The boys went kayaking, while I enjoyed a good book and a cup of hot cocoa on the house porch. My son (thankfully) arrived back in one piece, and though covered in fishy smelling mud and shivering, he was so excited to tell me about his adventure. 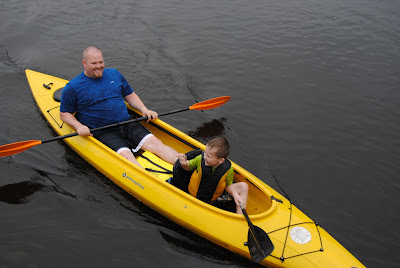 We went to the beach. The first beach outing Little Man can actually remember. He had a blast collecting shells and taunting the ocean. 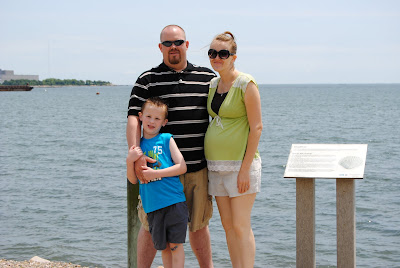 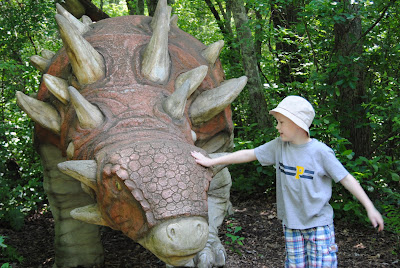 We spent another afternoon exploring a castle and it's grounds. Surprisingly, Little Man loved going through the castle and declared he needs "popcorn" lights (lights within stained glass globes) for his room too. 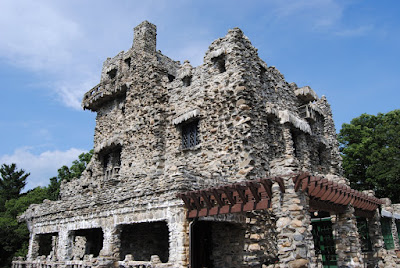 And we went to an aquarium. Little Man still wants to be a zoologist one day, so he was so excited to get up close and personal with a beluga whale, feed a sting ray, and pet a shark. Momma was a little freaked out when it felt like the sting ray was going to ram my hand to get his food, but I survived with a smile on my face. 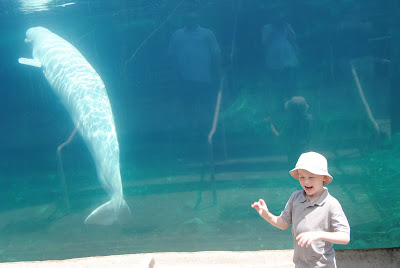 Getting time away, and the chance to focus on fun for a whole week was so nice. By the end of the week, Little Man and I were both excited to sleep in our own beds again though. But by the next day he was asking when we could go back to the "vacation house" again.
Posted by Staci A at 12:01 AM 1 comment:

The Winters in Bloom: Book Review

I'm always on the look out for new authors to fall in love with. It seems like once I find a writer I enjoy, I'll read every book they've put out.

I was recently introduced to the work Lisa Tucker, and I have definitely added her to my list of must read authors.

The Winters in Bloom, the sixth novel from Tucker, is the story of family, of love and loss, of heartache and guilt. The story follows the Winter's family, David, Kyra, and their son, Michael. David and Kyra have plenty of reasons to worry. (What parent doesn't?) But when their son disappears one morning, they both have to face their fears and their past.

I could easily see a little of myself in Kyra and David. Though they take their protectiveness to the extreme, I could relate to worrying about my little ones and wanting to know that they're safe. The story will have you thinking about why some people do go to such extremes to keep their children safe in today's world.

I read The Winters in Bloom in three days. Every chance I got, I was sneaking in a few pages. I just had to know what happened next. I can't wait to pick up another of Tucker's novels.

I received a copy of the book for review. All opinions are my own.
Posted by Staci A at 9:10 PM No comments: