My baby had his first day of the first grade yesterday.

We woke bright and early. A little too early, after a jittery, too excited to sleep through the night night. As we were brushing teeth, Little Man looked at me and asked "So you're sure I can't have just one more day of summer?"

After assuring him, that we could not have just one more day, even though we both were wishing for it (secretly in my case), we got on with our day.

The uneasiness of a new school, a new teacher, and the first day followed us out to the bus stop. I tried to joke around with him, I tried to get him to crack a smile. 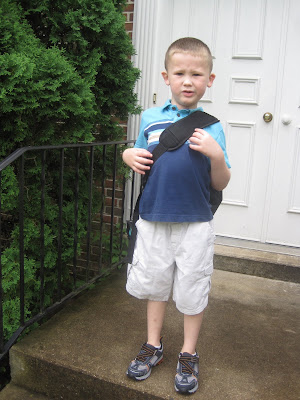 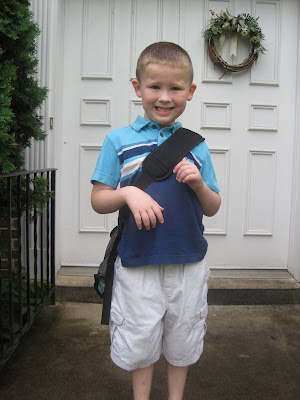 Finally, he got annoyed with me and faked a half smile. Better than nothing, I guess.

After school, I greeted him at the bus stop and asked what his favorite part of the day was. He responded with "nothing." I was terrified that his fears had come true, getting lost in the halls or not having anyone to play with at recess, or worse yet, a mean teacher.

So I asked, "You didn't like anything?" my voice full of worry.

The child looked at me like I had gone crazy. After a full second or two, he says, "No, momma, it was all my favorite," with a tone that made me feel dumber than dirt for assuming otherwise.

Yay for the love of first grade! Let's just hope it stays this way!
Posted by Staci A at 7:56 PM

You have such a handsome little guy there!! Wishing him an awesome first grade year!!!
Thank you for your sweet comment on my blog! And yes, my three kiddos certainly keep me very busy, but I guess I wouldn't have it any other way!!

My girl loved her first day of school too. Glad that he had a wonderful day - it makes us feel better know doesn't it?

Aaaw how sweet he is. I can remember when my boys were that age, so exciting the first day is!

I bet you felt so relieved. It makes such a huge difference when they like school. Love the half smile!

That's awesome that his first day went so well. Here's hoping that he continues to love it.