I love fostering a love for learning in my little one. Over the last few years, I've learned that one of the best ways to keep him reading and learning is to show him how fun it can be, and that reading doesn't always have to involve a book. We read the Sunday comic strips, cereal boxes, billboards, anything we see.

But I realized, I've never found a comic book I wanted to share with him. Many are too grown up, too violent, etc.

I was recently introduced to KiZoic, who offers comic books designed just for kids. Some available titles include Little Green Men: Go Big or Go Home and Shrek. They also have produced Scratch9, Mecha-Nation, and The Penguins of Madagascar comics. We have loved every Shrek movie that's come out, so it was a given for us to thoroughly enjoy the comic too. The artwork is entertaining and the characters' personalities shine through the words. The characters from film really do seem to come back to life in the comic.

Out of all the comics, Little Green Men: Go Big or Go Home was my son's favorite. He has begged to read it every single night since we received it. The comic follows three odd little aliens on their mission to conquer Earth. When things never go as planned, they have to survive obstacle after obstacle in their attempts to take over the world.

I would say it's meant for kids a little older than my own. At six, some of the conversations are a little harsh for me to read to him. But skipping a word or two here and there (things like "crap" or "sissy-pants" that I don't want repeated at school), I'm able to read it to him. There's also a little adult humor in the book, like an alien drunk on cow's milk, but it goes right over his head. 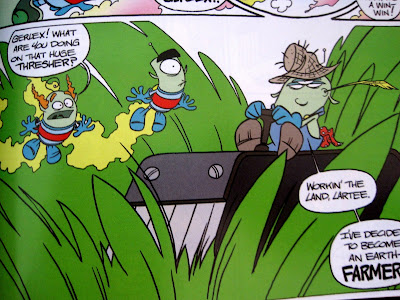 Overall, the KiZoic comics have been a fun way to get my son even more excited to read. He loves seeing what the characters have to say and what will happen next on their adventures.

KiZoic and Ape Entertainment have plans to expand their comic line for kids next month. So keep an eye out for what's to come from them!
Buy It:
You can purchase KiZoic comics in their online store for $6 to $9.

Samples were provided for our review. All opinions are our own.
Posted by Staci A at 12:23 PM

Dee at Cocktails with Mom said...

Thanks for sharing this Stacie. I agree most comic books are a bit too grown up for kids. My kids love to read and comic books would be a great addtion.