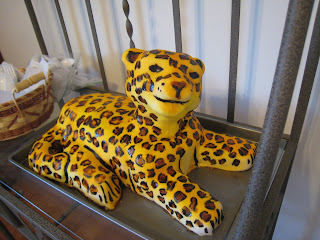 The little one's birthday was exactly a week ago. As with every year, we struggled to pick a theme. First, he wanted to do "Things that go" again, but we talked him out of it. After weeks of thinking, we all agreed to do "Animal Rescuers." We combined Bindi the Jungle Girl with Diego, which of course meant making two cakes. Hours of working later, we finished the jaguar and Bindi's treehouse/zoo. 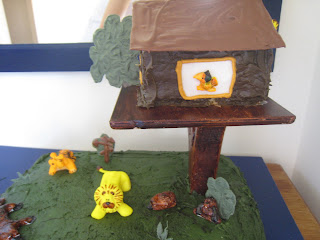 I hate parties, I'm not a people person, and there were so many people in our house that I barely knew. So I was forced to make small talk with everyone, while trying to keeps tabs on the kiddos. I was so glad when it was time for presents, and everyone was forced to sit still. The little one was a little to grateful during gift time. It ended up being 45 minutes of him saying "I love it, it's just what I wanted, I've been asking for this forever, thank you so much," over and over, to every single gift. Guess I shouldn't have prompted him on how to be thankful, it went over much to well.

The embarrassment of the day came when he exclaimed, "I asked for this all the, but my momma wouldn't let me have it." Mean momma! What kid doesn't need a web-blaster? Wait, that was the second embarrassing moment of the day. The first was when the four-year-old exclaimed to everyone within earshot, "The garage is shut so you don't see all of my mommy's junk!" Grr, kiddo!

Then there was the pinata, homemade of course, which turned out like a brick. Each kid took 3 turns at whacking it, and ten minutes later, it finally had a small crack. When it finally broke, after all the anticipation of the kiddos, two pieces of candy fell out. I had to tip it to get the rest to crash to the ground. Next year, I'll just make it out of concrete, it might break easier. 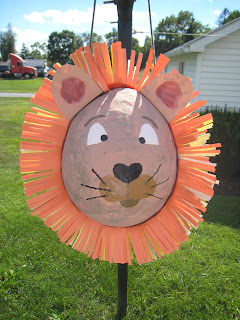 What am I talking about? Next year it'll be Chuckie Cheese all the way!
Posted by Staci A at 12:08 PM

holy crap, chica! You are a wonder woman with two cakes and a pintana! Those cakes look awesome! My birthday is in december is you are bored...

WOW!!!
Those cakes are awesome!