I had this huge craving for cupcakes yesterday, and the little one, aka GM, is not one to argue. Even though we had a few issues, like usual, they turned out pretty darn good. You can't even tell that we didn't have enough eggs or that the batter was lumpy because the the electric mixer wouldn't start. I did have a moment where I thought it was going to explode, but, no worries, my kitchen is still intact. 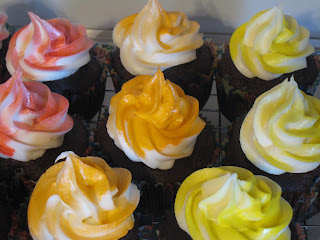 The mini ones didn't turn out too bad either, except that one in the corner, that tumbled to it's demise shortly after the photo. Too much icing should never be a bad thing. 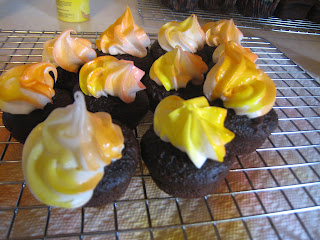 Your frosting looks like swirled soft-serve ice cream! It's beautiful!

Those look delicious! You are up to an awesome start blogging! I tagged you so stop by my blog if you are interested ;)