*Republished from 9/11/2008*
I've been contemplating how to start this post all morning. There's so much I have to say, but I don't have the powerful words I've read in so many other remembrances, just my story, and that of my family.

9/11 still makes me nervous, even seven years later. My heart seems to beat a little faster and tears seem to come just a little easier. As I'm making lunch today, Little GM yells out that the tv went black. His only concern was that he was missing Diego. My first thought today, however, flies to much more serious reasons why the cartoons suddenly stopped blaring. Luckily, after a bit of investigation, I find the cable guy outside on a ladder repairing one thing or another.

Seven years ago, I was only 16, I was trying to get ahead on my college education, so I was attending a local university in the mornings, then returning to high school in the afternoon. On the morning of the attack, I was in speech class when someone announced that a plane had hit the first tower. No one really knew what to think, an accident we had assumed. At that point, terrorism was not on the forefront in our minds.

As we finally were able to see the news, we learned that the situation was much worse than we had imagined. I finally snuck out of class to return a call to my mom, she was listening to the news at her school and trying to keep a group of fifth graders busy, while silently scared to pieces.

As I got to my car to leave campus, I found myself faced with a dead battery. The tears started coming. I was so scared, and now stuck with no way to get home. I sat in the grass and said a silent prayer for all those in the buildings while I waited for my dad to pick me up. 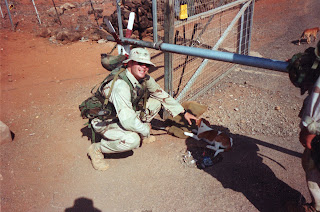 On 9/11 in an entirely different place on Earth, the man who would become my hubby was serving our country in the USMC. He doesn't talk much about what happened that day or what would come in the months and years that followed. He was dropped onto the front line of our fight against terrorism. He served in both Iraq and Afghanistan.

The hubby and I weren't married at that point, we vaguely knew each other from high school. He has this life I will never really know, and has lived more, and seen more than I ever will. When he talks about his former life as a Marine, he tells stories of getting into trouble with his buddies, the people he met, and the lands he saw. He tells about sleeping in one hole or another, the views from mountain peaks, trudging through god-forsaken lands. The stories are vague, and they are only told late at night.

However little I know about the life he lived before me, I will always be proud of him, and all of the other men and women who fight for our freedom every day.
Posted by Staci A at 11:45 AM

Hug your husband a little tighter tonight. He is a hero.

THanks to your hubby for serving.

Definitely hug your hubs tighter tonight. And thank him for all the work he did.

Beautifully told story, Stacy. I agree with everyone else whose commented, hug your hubby a little tighter tonight. He is definetly a hero.

Wow. Thank you for your story and let your hubby know we are proud of him. And proud of you as well.
Kasandria

What a wonderful post. Today always hits hard with me.

Prayers for your family for helping to protect ours. Thank you (all of you) for your service to us.

Yes, that's when those war stories get told. Late at night and after a few beers. At least that's when my husband tells them too. He had *just* started to talk about his time in Bosnia when he got deployed to Iraq. At that rate I figure I'll hear the real Iraq stories between 2010 and 2014, or approximately 5-10 years later, and probably after a few beers.

Freedom isn't free. it was bought for us by the blood, sweat and tears of our soldiers.

God bless your husband and all our military men and women.

We must never forget. Never surrender.

And the war stories always get told late at night after a couple of beers...It's a military thing. LOL