Ever since discovering the Buddies this past year, my son has been obsessed with seeing every Air Bud and Buddies movie he can find. I can't even count the number of times we've watched Space Buddies and Air Bud: Spikes Back. I thought we had seen them all.

But, I recently found out Walt Disney Studios Home Entertainment was releasing a special edition of Air Bud: Golden Receiver, and I realized we had never had the chance to watch this Air Bud movie. Needless to say, Little Man was ecstatic to learn there was another Air Bud we hadn't seen yet. 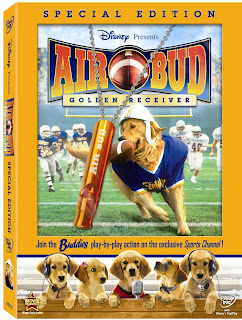 Little Man absolutely loved the Buddies Sports Channel bonus feature included on the DVD and asked to watch it over and over. The Special Edition DVD also includes a Air Bud sports whistle, though my five year old calls it a dog whistle (and chases the cats around blowing it).

Air Bud: Golden Receiver has a run time of 90 minutes and is rated G. As with all the other Air Bud movies, this one is sure to become a family favorite in our house. It's received the official two thumbs up from my son!

A copy of the DVD was provided for review. All opinions are our own.
Posted by Staci A at 2:10 PM

Anonymous said...
This comment has been removed by a blog administrator.
February 3, 2010 at 9:24 PM