Finally to the end of my little saga, after staying with the friend and her brother, who had just returned from Iraq, he and I hit it off. We started dating rather quickly. He was my protector. He was always willing to stand up for me and stand beside me. He was so amazing through all the drama that ensued.

Within two months, we were engaged. By four months, we had little GM on the way. And, at six months, we were married. It truly was a whirlwind. This year, we will be celebrating our fifth wedding anniversary. So to all who warned me it wouldn't last, that we were moving to fast, your warnings went unheeded and the last five years have been magical. More than I could ask for. 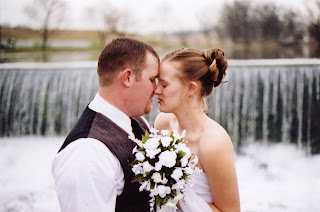 I really enjoyed your saga. What a beautiful ending! My hubby and I went from being long distance friends to practically engaged over one conversation. And it still works... 6 years later. (married 4). Anyways, thanks for visitng my blog and entering the giveaway! I'm gonna track your blog if that's okay! :)