Welcome to the Zoo

I am not a pet person. I know that's probably a terrible thing to say, but I hate cleaning up after them and they always seem to want to be around me more than I want to be around them. Maybe I've just had far too many experiences with clingy, messy critters.

Since GM adores animals, we do have a few pets in the house. We have Zoey, a Himalayan whose a year older than GM. We got her as a kitten when I was pregnant, I think I needed something to snuggle with and take care of then. She was a cute little thing, and since we weren't supposed to have pets in the apartment, she was confined to our bedroom. We were almost caught with her when the neighbors heard her meowing, but luckily since I had GM just a few days before, they assumed it was him crying. They even commented how our baby sounded just like a feline. 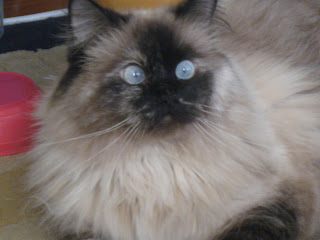 A few weeks ago my SIL asked if we would foster Little M's turtle, Jeter, for awhile. They had just moved and had no where to keep him, so we inherited him. We added him to our aquarium with out huge sunny. GM, of course, got very attached. Since we know Jeter will be heading back home any day, we decided to get a second one, newly named Diver, so GM won't be heart broken when his little shelled buddy leaves. 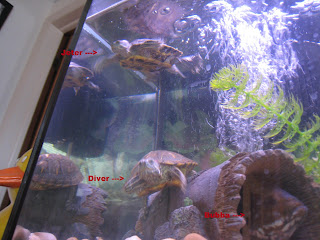 Now, for someone whose not so fond of pets, I really like these turtles. They are so much fun to watch, and they get so excited when they see us. Of course, they're just waiting for food. They even have their own distinct personalities. Jeter is a hog, very up front, and excitable. Diver on the other hand is jittery and more laid back. I think I'm turning into the Turtle Lady. It could be worse, I could be the cat lady with a billion of them running a muck.
Posted by Staci A at 12:23 AM