GM announced today that grandpa would be trick or treating as an "old goat." I wonder if grandpa knew about that. He was very serious about the idea, not quite understanding the underlying context. I burst out laughing every time he brought it up.

About 6, he headed out to make our rounds, knocking on neighbors doors and getting more candy than we will ever eat. All night long we heard (jokingly), stinky, p-u, don't come near me! It seemed that being a skunk was scarier than dressing as a ghost or ghoul. One guy jumped out from the bushes, GM turned around and yelled, "you better watch out, or I'll spray!" 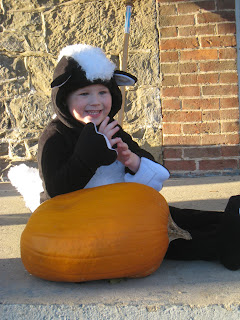 I'm glad the night is over and we won't need to peruse the neighborhood again for sweets until next year. It was fun to see GM's face light up as he got candy, and hearing him thank people without prompting. But, it was tiring, GM was in a hurry to get to the next house, he kept announcing, "one down, lots to go." He had also snuck some chocolate before heading out, so he was buzzed on sugar and not listening nearly as well as usual. As much as I love Halloween, I'm glad I have another 12 months before we'll have to see it again. 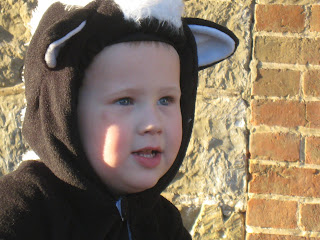 Am I missing something? Girl how did you guys already go trick or treating? Halloween's tomorrow! Well, glad you had fun! :)

I always enjoy Halloween, and I'm always glad it's over.

Great costume and he is so cute, the little Stinker!

what a handsome guy!

And yes, thank God it's over for yet another year!

It gets easier (sort of, lol) as they get older. Also, if you want to do something with all that candy, I wrote a WFMW post about the Candy Fairy last week. :o)

Your Pepe Le Pew is a cutie!

He looks so cute!

The old goat thing is funny!

Adorable costume and LOL at the Old Goat comment

he he....I'm still laughing about the "old goat" comment.

He is so cute! Sounds like you guys had a blast.