Lately it seems that when I'm in need of a toy, whether for a birthday gift, a special occasions, or just because, I get overwhelmed with all the choices. It's tough to find something that will withstand the play of a little one and hold their attention. But I've found a huge selection over at ebeanstalk that looks like it will do both, including learning toys and baby toys.

We recently received the Activity Bus from Plan Toys, a company who specializes in safe, green toys. With my little one getting ready for his first day of school, and his first bus ride there, the Activity Bus allowed him to explore some of his anxieties. 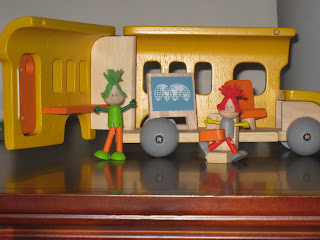 The bus arrived with two figures, school desks, a blackboard/map, and books. I was impressed with the quality. The set is made of wood, except for the figures' yarn hair, and very sturdy. As I was cleaning up one afternoon, I accidentally stepped on one of the desks, and was upset when I thought it was broken. But, the pieces popped right back together in an instant.

My 5 year old really enjoyed playing with the bus and figures. I was surprised at how long he spent making up dialogue for the "teacher and kid." Listening in on his play gave me a lot of insight into what he is worried about in regards to starting school.

The activity bus is intended for ages 3-6. The books included are rather small, so I set them off to the side after the first time we played with the bus, so my son wouldn't lose them (and I wouldn't step on them). The set is made from rubberwood, wood from rubber trees too old to produce latex. They are also dyed using water-based dyes.

Little man has been scouring the Plan Toys catalog, and has many items added to his own personal wish list. But the Crane is at the top.

*This is part of my Kick off to Kindergarten Party. Be on the look out for more posts, reviews & giveaways throughout the week!
Posted by Staci A at 12:01 AM

How fun! I wonder if I could do a kick off to college party? :)

what fun...Ill be back. Do come enter the giveaways on my blog too :>

What a cute toy! Such a great idea for a child that's getting ready for their first school year. My daughter actually likes school, so I guess I'm lucky.

We have Plan Toys dollhouse sets and love them. Not only are they cute, but they have held up to lots of torture and still look brand new.

This is so cute, my son would love it too. Plan Toys has such high quality products, love them!

Cool idea--the eco-friendly toys. Too bad they're so darn expensive. :( My boy would lose interest and that's not what we do. Otherwise, we'd be right on it. :)