Little Man loves holiday movies and would happily watch them year round. But there seem to be only a few that meet his high standards for a "good Christmas movie." Apparently Gotta Catch Santa Claus meets his approval. We've already watched it several times in the past few weeks and he requests it on a weekly basis.

You may remember I posted a few weeks back about the release of Gotta Catch Santa Claus starring William Shatner as the voice of Santa. 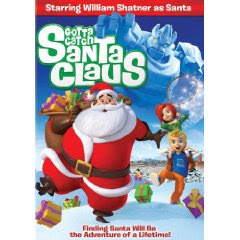 About the movie from Lionsgate:
Sure to become a modern-day holiday classic, this funny, contemporary DVD is enjoyable for the entire family and features six jolly jammin’ new holiday songs. When a friend starts to doubt the idea of Santa Claus, 12 year old Trevor sets out on a mission to catch old St. Nick in order to prove his existence and put the skeptics to rest. Gotta Catch Santa Claus, which will be broadcast nationally on ABC Family during their annual "25 Days of Christmas" programming block, features bonus materials on the DVD that include deleted scenes, behind the scenes Santa footage, sing-along songs and more!

Our Thoughts:
We enjoyed the movie as a whole family. The songs were catchy, and Little Man quickly started singing along to them. The animation was both lively and entertaining, and we all were interested to see how the kids' adventure, to prove that Santa was real, would end.

Gotta Catch Santa Claus is a fun DVD that will easily be watched again (and again if Little Man has his way) as the holidays approach.

To Buy:
Gotta Catch Santa Claus retails for $19.98. You can purchase it at Lionsgate or Amazon. Or you can be on the lookout for its arrival on ABC Family.

Thanks to Lionsgate for providing a copy of the DVD for review.
Posted by Staci A at 7:26 PM

We love holiday movies in our household--this one looks cute!

I love this movie!

I need this to watch my niece! looks cute, great review!

Anonymous said...
This comment has been removed by a blog administrator.
February 2, 2010 at 7:47 AM