We were supposed to visiting Santa right now. GM was so excited last night when I told him he could go talk to Santa this morning. He told be he was still going to ask for a harmonica, a game system, and now, a Batman toy. I scrambled around and managed to find the Batman toy last night, so that Santa could fulfill his wish list.

This morning rolled around, GM woke grumpy and complaining. Granted, he's been sick all week, but yesterday, he was feeling much better, just crabby. He announced this morning he was too sick to see Santa. I'm not fighting him on it. I think he's more anxious and unsure than sick, but I'm not going to push him into doing something he doesn't feel comfortable with. It's not the first year he missed out on seeing Santa, and we'll try again before the holiday arrives.

Our only two Santa visits: 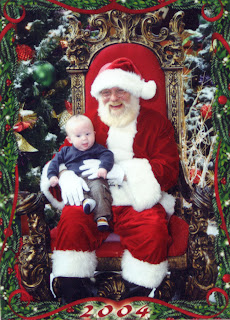 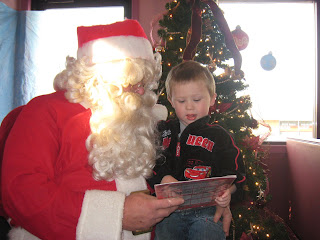 Those pics are so cute!!!

I gave you an award over on my blog! Go check it out!