Hubby and I were asked to create a cake for a little boy who was turning 3 last week. They were planning a farm theme, so he assumed it would be pretty simple and agreed. It, of course, fell right between Thanksgiving and the wedding we had to go to, so there was lots of stress and a few late nights put into it. Plus we had house guests that week, so I was up even later trying to straighten the kitchen back up.

The whole fiasco turned into argument after argument with the hubby. He wouldn't consider my ideas, but got frustrated when his ideas didn't work out. The order came with so many requests too, they wanted two flavors of cake, a barn, a tractor, cows, horses, and cow poo. What kid wants cow poop on their cake? But, we obliged. Hubby was in charge of buying the tractor, which had to be red, and bought one that ended up bigger than the barn. The cake was lopsided, the writing not perfect, the animals wouldn't stand up, you get the picture.

And yet, when he dropped it off, they were pleased with it. So, whatever works I guess. Here's how it turned out: 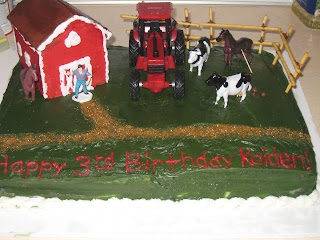 Note the cow poop behind the front cow. Yum, right?

You can see some of our better creations here: Jaguar and Treehouse, Cars and Monkey, School Bus
Posted by Staci A at 12:01 AM

That is a great cake. WOW

That is so stinkin cute! I love the cow pile! lol

Wow, that turned out great! ROFL about the cow poop, nothing quite so appetizing as that :-).

it is so cute...I dont know about eating cow poo though...lol

Oh Wow! I looked at the other ones you made too! You're amazing chica!

that cake is adorable!

Rather nice place you've got here. Thanks for it. I like such topics and everything that is connected to this matter. I definitely want to read a bit more on that blog soon.

It was rather interesting for me to read this blog. Thanks for it. I like such themes and anything that is connected to this matter. I would like to read a bit more soon.

Cool blog you got here. I'd like to read a bit more concerning this matter. The only thing it would also be great to see on this blog is some pics of some gizmos.