My 4 year old loves his "animal friends," aka his stuffed animals. He is always excited at the chance to add another to his herd.

Recently, he received a designer plush toy from Big Eye Dummies. Reggie, a gorilla, arrived with 2 sets of interchangeable eyes and mouths. The eyes and mouth were sewn down when he arrived, so that nothing would get lost. But a simple snip of the threads and we were ready to start mixing and matching. 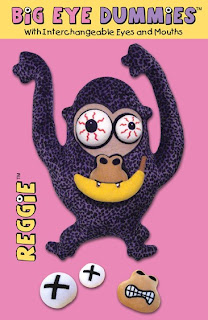 Little Man's reaction:
My son had a blast mixing up Reggie. As soon as he spotted the second set of eyes and mouth, he announced, "Momma, look! You can switch-a-roo!" For two straight hours he changed Reggie in every way imaginable. He ran from one room to another yelling, "A two eyed (or two mouthed, or three eyed) monster is on the loose!" 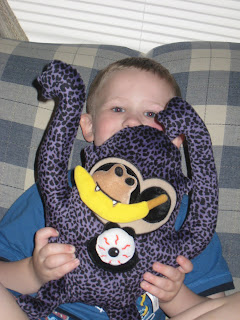 My thoughts:
Reggie is very well made, very withstanding of the rough play my 4 year old put him through. I love that the eyes and mouth attach by magnets instead of velcro (which attracts every stray cat hair in the house).

The only issue we had was when me 4 year old sweetly asked if "the x's [in his eyes] mean he's dead?" Ugh, only my kid. Luckily, that questioned passed quickly, and he was back to playing.

From Big Eye Dummies:
Big Eye Dummies are designed and created in New York City by David Lipson, an animation producer and director. In 2008, they received the Creative Child Magazine’s Preferred Choice Award. Big Eye Dummies are tested at independent laboratories in America, which comply with the European and American Toy Safety Standards.

And...
Big Eye Dummies is giving away a free doll every month! If you want to enter their contests, become a fan of Big Eye Dummies on Facebook. Further instructions are provided over at the site.

You can also learn more about Big Eye Dummies at their site or purchase a doll ($19.99) for yourself. It's recommended for ages 2 and up.
Posted by Staci A at 7:00 PM

My kids love our Big Eye Dummies doll too!