Monkey in the Jungle Party

I'm down to only a week before the little one's party, and still have barely anything ready to go. I'm tired, exhausted really, and feel like I should just talk him into going to McD's or the park. If only I hadn't told everyone when it was, I just might do it.

But since ya'll don't want to hear me whine. Here's a little from Little Man's 2nd birthday in 2006.

He was obsessed with monkeys for some reason. So we decided to have a "Monkey in the Jungle" party.

I created invites using a template from Parents magazine. Basically, I cut felt and cardstock in the shape of a banana, glued the bottoms together, and cut the top felt into strips. The details for the party were written on the cardstock, so when the invitee "peeled" the banana they discovered the info.

We went very simple with the food that year, since I knew the majority of my day would be spent chasing kids (and I was a very tired momma from college classes on top of every day life.) So we had pizza, chips, pretzels, and fresh fruit.

For dessert, we had frozen bananas dipped in chocolate (delicious). Plus our two monkey cakes: 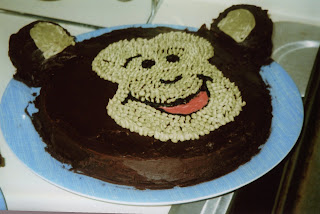 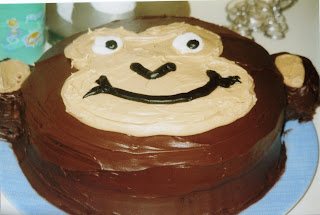 Because all the kids there were so young, we didn't have a lot set up for them. We threw a ton of balls into the yard, put out bubbles and ride ons, and created a gorilla bean bag toss. (Hubby painted a huge gorilla and cut out a circle on it's belly and I made bean bags for the kids to throw into it.) 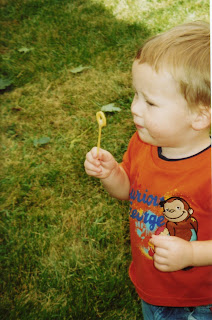 For favors, each child reveived a plush monkey, a barrel of monkeys, some stickers, and a mini box of animal crackers.

It was every monkey-loving, 2 year old's dream come true!
Posted by Staci A at 10:34 AM

very cool! I love the birthday parties where you just set stuff up and let them amuse themselves with it. so much more fun than making them do things. =)

Did you make those cakes! They are amazing. Is it tradition for him to have 2 cakes? I nocited he had 2 in the other one also. FUN!

Awesome ideas! And those cakes! No monkey-ing around there. (okay, that was just dumb. lol)

If you lived close to me I would hire you to plan my kids parties! Love the monkey theme. My son will be 3 soon and I'm trying to pick a theme...I thinking it's going to be truck related since that's his current obsession. Good luck with the upcoming party!

So cute! I hate birthday parties. I'm always so stressed out and I can't enjoy myself...

Those monkey cakes are awesome!