There are certain books that once you start, it's impossible to put down. They evoke such emotion that you have to see how things work out, what happens to the characters.

Willow by Julia Hoban is one of those books. It's powerful, thought-provoking, and at times completely raw. It makes you bounce through emotions alongside the characters. 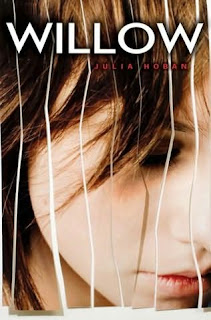 From the cover:
Seven months ago on a rainy March night, Willow's parents drank too much wine at dinner and asked her to drive them home. But they never made it-Willow lost control of the car, and both of her parents were killed.

Now seventeen, Willow is living with her older brother, who can barely speak to her. She has left behind her old home, friends, and school. But Willow has found a way to survive, to numb the new reality of her life: She is secretly cutting herself.

Willow is a story of loss and love. It's a story of pain, both mental and physical. It's a glimpse into a world many don't understand, and it's so much more than the stereotypes that surround cutting.

Willow shows hope. Through all the despair she faces, all the pain she endures, it shows that there is hope through it all. It shows friendship and understanding. It shows reality, the reality that many teens and young adults face in silence.

I would recommend Willow to parents of teens, to friends and family of people who cut. At times, I found the book almost painful to read, it was so emotional. But that pain came from the reality of the situations. It truly was an amazing read-as a mom, as a daughter, as someone who has lived through the world of cutting.
Posted by Staci A at 2:11 PM

Sounds good! Ill have to see if I can get it:)